At a time when everything is virtual, when everything changes rapidly and changes with us, painting in real time with the light becomes a shared experience to capture the fleeting moment of creation. A shaft of light that generates an emotion through the colours, the sign of an “eye” that captures the images of the present. All the possible images from the media jelly that turns communication into a many-headed monster. An operation of purging, of return to the essence; first of gesture and then of thought through primary media such as sign and colour. A step back, a stepping outside so as to get a clearer, untainted view of the external
influences in this society of distraction. A rediscovery of the essence of the spirit, the essence of feeling unleashing emotion. Being beyond the frequency of the flows, in order to become a flow that generates
sensations and stimuli: a continual flow. No new languages, no new constructions, simply pure purged reality, essential and concrete. A real present, authentic and vital

This is an improvised performance, based on the processing in real time of a continual and chaotic flow of digital information.
A source, a complex original signal, is emitted by an initial electronic element, the TV, in an unpredictable and chaotic manner. This is then received and decoded by another electronic component, the web-cam, resulting in two further emissions: one manifest which will become visible on the screen, and the other silent and codified which is transmitted to the other two electronic receivers. These will decode the signal received
and in turn reprocess it in a manifest form: the first in visual form and the second in the form of sound. In this chain of communication we can thus recognise two levels: one immanent, silent and invisible pertaining to the machine-machine relation, and the other manifest, audible and visible, pertaining to the man-machine relationship.
The performance will emerge from the reciprocal assumption of these two levels, but only one can be controlled by human action, that of the manifestation. The performers will find themselves having to deal with vast quantities of electronic variables, attempting to translate them into visible and audible substances for the spectators. In this attempt, everything lies in the aesthetic value of the work, in other words in the, possibly futile, intention of immobilising in solid forms a formless fluid in continual regeneration. The work is proposed to the spectator in the manner of a huge visual and audio kaleidoscope, in which the recognition of intelligible shapes or discourse will be only fleeting and illusory instants. Brief flows of transient emotions. 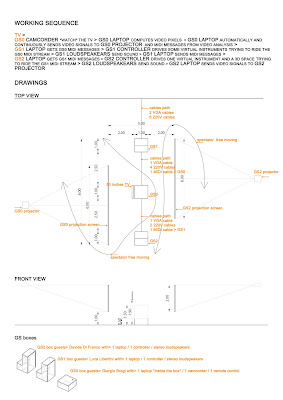